Jan 22, 2019 5PM Stephanie Schorow author of "Inside the Combat Zone: The Stripped Down story of Boston's most Notorious Neighborhood"

SEE the show live at 5PM at http://somervillemedia.org

On Jan 22 at 5PM I will be interviewing journalist Stephanie Schorow on my show Poet to Poet Writer to Writer( Somerville Media Center) about her new book "Inside the Combat Zone: The Stripped Down story of Boston's most Notorious Neighborhood"--I remember visiting the Combat Zone in the 1970s when I was a student at Boston University -- I wanted to experience "life." I went to a seedy bar--one that Wilbur Mills might have frequented--sat down and was about to order when the woman next to me said, " Give this kid a glass of milk." That's Life!

A Boston-based freelance writer and journalism instructor, Stephanie Schorow is the author, co-author, or editor of eight books on Boston history: Inside the Combat Zone: The Stripped Down story of Boston's most Notorious Neighborhood; Drinking Boston: A History of the City and its Spirits; The Cocoanut Grove Fire; Boston on Fire; East of Boston: Notes from the Harbor Island; and The Crime of the Century: How the Brink’s Robbers Stole Millions and the Hearts of Boston. With co-author Beverly Ford, she wrote The Boston Mob Guide: Hit Men, Hoodlums and Hangouts and served as the editor of Boston's Fire Trail with the Boston Fire Historical Society. She has worked as an editor and reporter for the Boston Herald, The Associated Press and numerous other publications. She currently writes restaurant reviews for the Boston Globe North section.
She currently teaches professional writing at Lasell College in Newton, Mass. She has also taught graduate and undergraduate courses at Regis College, Lesley University and Emerson College.
She is now coordinating a Citizen Journalism Program for Malden Access Television. See: MATV's Neighborhood View at https://neighborhoodview.org.
Posted by Doug Holder at 8:16 AM

Jan 15, 2019 5PM: Richard Oxenberg author of "On the Meaning of Human Being: Heidegger and the Bible in Dialogue" 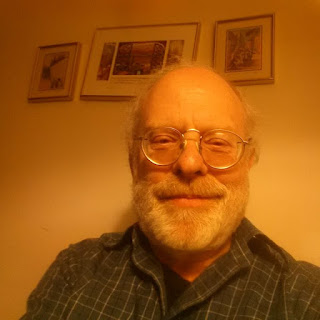 see it live at 5PM at  http://somervillemedia.org