W.E. Butts is the author of several poetry collections, including Sunday Evening at the Stardust Café, which was chosen as a finalist for the 2005 Philip Levine Prize in Poetry and selected winner of the 2006 Iowa Source Poetry Book Prize, and the chapbooks What to Say if the Birds Ask (Pudding House Publications, 2007) Sunday Factory (Finishing Line Press, 2006), White Bees (Oyster River Press, 2001), and A Season of Crows (Igneus Press, 2000). He has received two Pushcart Prize nominations and a Massachusetts Artists Foundation Award, and has taught in poetry workshops at the University of New Hampshire and has been a featured presenter at several community events and conferences. In 2007, he was a visiting writer at Cornell College, Iowa. He is a member of the faculty of the BFA in Writing Program at Goddard College, and is listed in two editions of Who's Who Among America's Teachers. His poems appear frequently in such magazines as Atlanta Review, Birmingham Poetry Review, Cider Press Review, Cimarron Review, Mid-American Review, and Poetry East, and have been anthologized in The Anthology of Magazine Verse (Monitor Books), Under the Legislature of Stars: 62 New Hampshire Poets (Oyster River Press, 1999), Open Door: A Poet Lore Anthology, 1980 – 1996, (Writer’s Center Editions, 1996), Heartbeat of New England: Contemporary Nature Poetry (Tiger Moon Press, 2000), Leaves by Night, Flowers by Day (Iowa Source, 2006), and elsewhere.
Posted by Doug Holder at 6:21 AM
Labels: W.E. Butts Doug Holder Poet to Poet 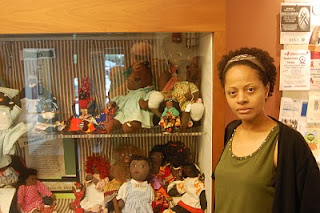 Mignon Ariel King is an urban womanist writer who was born in Boston’s City Hospital in 1964. An alumna of Simmons College and a former English instructor, she created MAPS-ONE (the Memoir and Poetry Sisterhood of New England) through which she edits the online journal MoJo! and its sister site Extra MoJo!; organizes A Century of Black Voices annual poetry readings to honor Black History Month; and plans future workshops and book contests. She has been reading at open mics since 1998. Her autobio- graphical trilogy (in three genres–memoir, poetry trilogy, novella) is based on a lifetime spent in Greater Boston.


Ms. King’s first published poetry collection is The Woods Have Words (Ibbetson Street Press, 2009). The third volume of her poetry trilogy, Words of Flight, is a series of dramatic monologues of New Englanders, dedicated to her late mother who grew up in New Hampshire. Currently revising and submitting the memoir and novella components of the trilogy, Ms. King is also writing a second novella, set in her childhood neighborhood in Roxbury, Massachuse
Posted by Doug Holder at 2:31 AM
Labels: Poet Mignon Ariel King Doug Holder
Newer Posts Older Posts Home