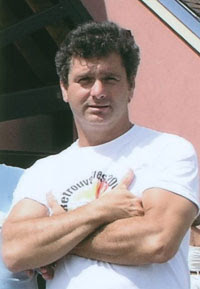 David Surette is a poet from Malden, Massachusetts. His poems reflect the undercurrents of contemporary American life.

David Surette was born July 14, 1957, at the Malden Hospital. He lived in Malden, Massachusetts for thirty-seven years. David attended the Immaculate Conception Grammar School for six years under the watchful eyes of the Sisters of Notre Dame. He finished his school days in the public schools, Beebe Junior High and Malden High, graduating in 1975.

David earned his B.A. in English from Colby College. He wrote and directed his original play Warm Angel senior year and earned the college's drama award.

After graduation, he managed the band Boys Life. He also was the band's chief lyricist, writing with his brother John, the band's singer and guitarist. David wrote the lyrics on the "A" side of their two singles and four of the six songs on their celebrated E.P.

When the band broke up in 1984, David went back to school to earn his teaching certificate and began a 15 year teaching tenure in the Waltham Public Schools.

He continued writing, not lyrics as his brother's own lyrics eclipsed his output, but fiction. He wrote short stories and completed two novels, Today's Special and Mud Season.

Malden is his first chapbook of poetry. He began the book in a summer session of the Boston Writing Project with the goal to finished it by his twenty- fifth high school reunion and the family gathering at Thanksgiving 2000, and then offered it on his website, www.davidsurette.com, in the spring of 2001. He released his second chapbook Muckers, Grinders, Shapers, Hangers, and Huns in 2002 and published over two dozen poems in various journals and magazines and became a regular reader and feature at poetry venues, libraries, schools in New England.

In 2003, he issued his third chapbook Good Shift which included "Forever and Ever" which was nominated for "Best Love Poem" at the Cambridge Poetry Awards.

Koenisha Publications of Michigan published Young Gentlemen's School in August, 2004. The book collects all the poems from David's three chapbooks plus ten new poems. It is available online at www.amazon.com, www.koenisha.com, and at your local bookstore.

Koenisha published David's second book of poetry Easy to Keep, Hard to Keep In in 2007. It is available online at www.amazon.com, www.koenisha.com, and at your local bookstore.

David is the co-host of Poetribe, a poetry group that offers poetry workshops, open mics, featured poets and the occasional poetry slam. They meet every other Saturday at the East Bridgewater Public Library in East Bridgewater, Massachusetts. He teaches English at East Bridgewater High School.

He currently lives in southeastern Massachusetts with his wife and three children. He and the family keep horses and sheep under the watchful eyes of thier border collie Rowdy and Martini, a very opinionated chihuahua.
Posted by Doug Holder at 3:29 PM
Labels: Holder on Surette
Newer Posts Older Posts Home