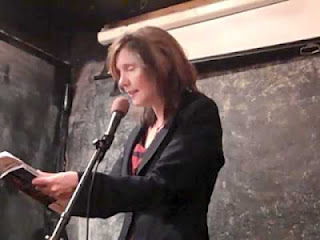 Elizabeth Searle is the author of two works of theater and four books of fiction: CELEBRITIES IN DISGRACE, a novella and stories; A FOUR-SIDED BED, a novel nominated for an American Library Association Book Award and MY BODY TO YOU, a story collection that won the Iowa Short Fiction Prize and a 2011 novel, GIRL HELD IN HOME. The New York Times Book Review called her novella Celebrities in Disgrace “a miniature masterpiece.”


Elizabeth Searle's and Michael Teoli's Rock Opera, TONYA & NANCY THE ROCK OPERA-- as well as her and Abigail Al-Doory Cross’ original opera, TONYA AND NANCY: THE OPERA-- have drawn worldwide media attention. In May, 2006, at the American Reperatory Theater’s ‘new space for new works,’ Tufts Music premiered the opera, which is based on the infamous Tonya Harding/Nancy Kerrigan ice scandal. The opera drew coverage from-- among other media outlets-- Associated Press, ESPN Hollywood, Sports Illustrated, the New York Times, the London Times, The Daily Show and National Public Radio. Searle and composer Teoli created the full-length Rock Opera which premiered in February, 2008, drawing media coverage from GOOD MORNING AMERICA, CNN, CBS and FOX. A critically acclaimed new production of the rock opera was produced by Harborside Films and performed at the American Repertory Theater's Oberon Theater in January, February and July of 2011

.
Searle’s short stories have appeared in magazines such as PLOUGHSHARES, REDBOOK, NEW ENGLAND REVIEW AGNI, and KENYON REVIEW and in anthologies such as LOVERS and DON'T YOU FORGET ABOUT ME. She won the 2010 Boston Literary Death Match and the Lawrence Foundation Fiction Prize. She received her MFA from Brown University
.
Elizabeth has taught fiction writing at Brown, Emerson College, Bennington MFA, Stonecoast MFA, and the University of Massachusetts (Visiting Writer, 2007-08). Her novella CELEBRITIES IN DISGRACE was produced as a short film in 2010 by Bravo Sierra Productions in 2010 with script co-written by Elizabeth. She served for over a decade on the Executive Board of PEN/New England and founded the Erotic PEN readings. She teaches at Stonecoast MFA. Elizabeth lives with her husband and son in Arlington, MA
Posted by Doug Holder at 5:03 PM
Newer Posts Older Posts Home