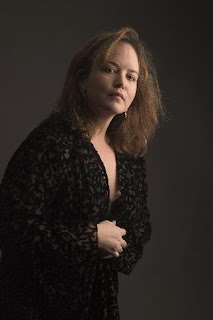 With Lo Galluccio it is a "coup de foudre". You're reading something like:

"...Accept kisses of water in light" and there's no help because she's hit

else. Yet you don't know how much that fight will can be dangerous to you,

really like a boxer until fatal k.o.: Lo, the girl from Boston, hides other

concentric fires which your unbridled imagination already foresaw by certain

words caught in a poem entitled Bloom the River. Words like islands of

looping my hair against his wall. My profile's smoke." (from Blasphemy).

emerged from the soul of a woman with multiple qualities of actress, poet,

and then leader of the Jazz Passengers, indeed targeted her through those

poems beginning a fruitful collaboration (she appeared in 1994 on their

Knitting Factory label, she produced the astonishing Being Visited followed

(2003) by a self-release production entitled Spell on You, further nine tracks

of uncommon and burning intensity.

Poetry can be "possession" and Lo seems "possessed by Poetry: strenght,

urgency, fury of written word. She breaks her mirror and you try to gather

some fragment of yourself into them, discovering, little by little, the soul who

those verses of flesh and blood has embodied.

Tortuoses, dramatics and also obscure verses, disseminated by pitfalls and

precipices. Words chosen with care by her, sometimes hard and pointed inside

a sensual and ethereal texture at the same time, modern and antique, part of

the world and yet distant from it, unforeseen, surprising, sounding like an

unusual gesture during a meeting with someone.

Robert Lowell and John Berryman, voices of the "confessional poetry" and as

(or the less know - at least in Italy - Diane Di Prima, Diane Wakoski and Denise

Levertov) but also elegant and intriguing like an Antonia S. Byatt's page.

While you're writing about this, her voice has already contaminated you like a

virus, with no help of healing, her mesmerizing voice-presence blending sounds

in your mind evoking different atmospheres between the subliminal jazz of

recitatives, transparencies, harshness, melancholy, that you have loved in Rickie

"ex novo", shaped to herself , to her own soul, soaked by genuine pathos, splendidly

unveiled in the shadings of These Diamonds Are My Very.

Yes, jazz above all, but also blues and also a charming cover of Sinatra's Fly Me to

the Moon or an unexpected Que Sera Sera, from a groove to the other, giving us

But a simple sigh could be sufficient to her, ever singing - one more time - :