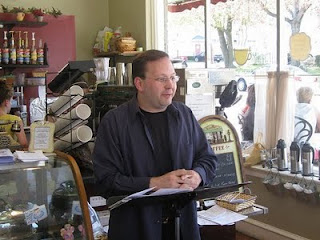 Chad Parenteau was born in Woonsocket Rhode Island in 1973 and grew up in Bellingham, Massachusetts. Graduating high school in 1991, he entered Framingham State College and majored in English, learning poetry and prose writing from authors such as Alan Feldman and Miriam Levine and studying journalism under Desmond McCarthy. While volunteering for the college newspaper The Gatepost, he wrote articles, columns, and comic strips, serving his Junior and Senior years as the Comics Editor and Living/Arts Editor respectively.

Moving to Boston in 1995, he obtained his MFA in Boston, studying with Bill Knott, Gail Mazur and John Skoyles. His involvement in the small press continued, publishing poetry in Meanie and Shampoo and profile pieces for Lollipop, Comics Interpreter and Whats Up. He was also an early contributor to Boston's Weekly Dig, becoming the only print journalist to be present during the 2000 protests before and after the presidential debates at UMass Boston.

In 2003, Chad self-published his first chapbook, Self-Portrait In Fire (based on his MFA thesis) and won a Cambridge Poetry Award. He continures to appear in numerous print and online publications, including anthologies such as French Connections: A Gathering of Franco-American Poets. In 2007, his poem "Moonlighting" was on display at Boston City Hall as part of The Mayor's Prose and Poetry Program. 2008 saw the publication of his third chapbook, Discarded: Poems for My Apartments from Cervena Barva Press.

Chad has featured in several venues, including The Nantucket Poetry Slam, the Fox Chase Reading Series in Philadelphia, the 17 Poets! Reading Series in New Orleans, and the Out of The Blue Art Gallery in Cambridge, Massachusetts, where he is the current host and organizer of Stone Soup Poetry, one of the longest-running weekly poetry venues in the state. His recent contribution to the reading series is creating and editing its online tribute journal Spoonful.

Chad continues to live and work in the Boston area. His current place of employment is the VA Hospital in Jamaica Plain. In addition to being a retinal imager for the Optometry department, he serves as Senior Imager for the Care Coordination Services Store and Forward Training Center, a national telemedicine program, and edits its bimonthly newsletter, Artifacts.
Posted by Doug Holder at 3:34 AM
Newer Posts Older Posts Home