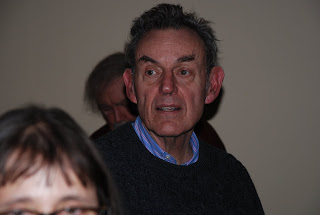 My guest Dec 4 at 5PM will be poet Robert K. Johnson author of: From Mist to Shadow:Poems

From Mist to Shadow:
Poems by Robert K. Johnson

Robert K. Johnson is a poet, writer, retired English professor, and student of life. Between 1975 and 2007, he’s had six collections of poetry and two non-fiction books published, plus been featured in two poetry anthologies. In this latest book, Johnson tenderly transforms the small memories, wonders and sorrows of everyday life into moments brightened and sharpened through his words.

The commonplace turns quietly sinister as Johnson remembers the unexpected suicide of a friend. “Jimmy” recalls the class clown, the day he put his head in the oven after school, and the numbing effect on the poet:

And suddenly all the bushes, trees
and flowers I stared at in our yard
looked different, strange,
as if -- year after year --
they had been hiding something from me.

“Anguish” is a simply stunning poem about a mother lost to dementia, unable to separate reality from hallucination, and the son forced to witness her decline. I cannot do this fine poem justice with an excerpt; it must be read in its entirety.

“Brother of the Prodigal Son” is a long poem that remains true to the biblical version but extracts a bitter truth unspoken in the parable. This poem, also, cannot be adequately honored with an excerpt.

“The Truth About the Past” is another powerful recollection about the father who shared memories of his own revered father’s many talents. A long-lost great aunt shatters those memories with a harsh truth:

…she described my father’s childhood,
starting when he was two
-- the year his father abandoned
his wife and son.

Life is often unpredictable. This excerpt from “On F. Scott Fitzgerald’s ’Babylon Revisited’” shows how forgotten words and acts unexpectedly return to us like bad karma:

-- all can silently arc
over our heads for days,
for blithe or busy years
until the moment they curve
back into our lives as swiftly
as a hawk’s swooping claws
puncture a rabbit’s skin.

Regardless of age, a poet is always a poet. Age settles over us all, but Johnson still sees poetry in the world around him:

…subjects for poems,
like frightened children
seeking shelter,
tug at my mind…

One critic describes Robert K. Johnson as “the poet/laureate of the ordinary moment in time.” He is that and much more. His poetry is quietly powerful and poignant. This collection lives, breathes, and transforms the ordinary through the thoughts and memories of a skilled wordsmith. From Mist to Shadow is a book you’ll want to keep and reread.

-- Laurel Johnson is a reviewer for the Midwest Book Review and other magazines.
Posted by Doug Holder at 6:16 AM
Labels: Holder on Johnson
Newer Posts Older Posts Home