My guest will Chava Hudson 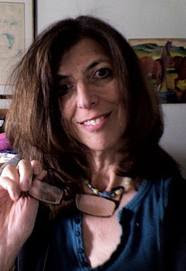 After working as a graphic designer, an art teacher, and then designing and producing her own line of outerwear for the boutique market, Chava Hudson became smitten with the Internet. In 1998, she studied web design and since then has created sites for the Universities and non-profits, but mostly designs websites and graphics for small businesses, artists and writers. She brings a unique solution to each project and to each client, discovering each client's needs and communicating their message visually.

As an artist, Chava produces limited edition prints which are currently in private and corporate collections and has taught graphic design digital painting at Endicott College in Beverly, MA. She's completed four novels, many short stories, and publishes Zingology.com an online literary zine.

In 2009 Chava began producing and hosting an award-winning, monthly local cable show for BevCam entitled Out and About, produced by Film North in Beverly, MA. The show features interesting musicians, writers, filmmakers, an occasional foray into cooking, and even a psychic reading by the offical witch of Salem, MA. Later that year, she started The North Shore Jazz Project with Henry Ferrini, one of the guests on the show.

Review by Zvi A. Sesling

Chava Hudson has succeeded where other writers have failed: you know what murder is about at the beginning, yet the novel works, the people are believable and so you keep on reading.

Hudson’s story is about a real estate agent in a realty firm that does a bit more than sell realty. In fact, the way they drum up business will just kill you. But that’s all I’ll tell you, except that the novel is filled with irony, a touch of humor, but more important, leaves you with serious questions about moral values, mortality and what the future might bring to an ever aging population, a theme done many times, but here with a new twist.

Singles, Anne meets Steve and the romance begins. But Steve’s mother gets in the way, and not as you might imagine. Still, Anne, whose boyfriend has abandoned her, finds a new romance irresistible, even with the knowledge she keeps inside.

The story is fast paced, easy and fun to read and, perhaps, should be read by people with Victorian ideas of life and death and what is noble and what is not.

This is Ms. Hudson’s fourth book (she also writes poetry and edits the online journal zingology). It took her just over a year to write the closing, but the novel idea (yes I mean that both ways)came during a walk around town where she saw a for sale sign on a front yard. The realtor's name was Kevorkian, which got her thinking. Hudson had also just returned from Costa Rica where she spent two weeks at an artist colony and rode up to Monteverde with some friends she had made there. The result, a book worth reading.
Posted by Doug Holder at 6:12 AM
Newer Posts Older Posts Home