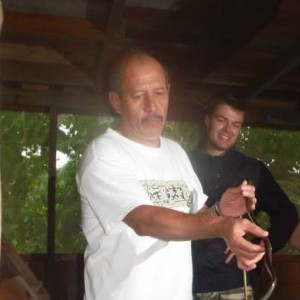 Sergio Inestrosa received his PhD in Literature from the Universidad Iberoamericana in Mexico City, Mexico in 1998. Sergio was a Jesuit student for 8 years in Central America, living in El Salvador, Panama and Nicaragua. While in El Salvador he studied with Ignacio Ellacuria, a well known Jesuit scholar who was killed in 1988 by the military. When Professor Inestrosa returned to Mexico, he studied to receive a Masters in Communication and became a professor and researcher in the Communication field. He has presented many research papers in Mexico, Latin America, USA and Asia, and has published 6 books in Mexico. In 1999 he taught Spanish at the Estrella Mountain College in Avondale, Arizona, and in 2000 he conducted Postdoctoral research at Harvard, focusing on the works of Octavio Paz. Since coming to Endicott, Professor Inestrosa has been teaching Spanish and Mexican Culture and has been busy organizing a Spanish Cine Club on campus. He has also developed the Spanish minor and designed many new courses, including Spanish for Professionals, Spanish Cinema, Spanish Translation, Spanish Composition, Latin American History and Culture, and a Latin American literature course. Professor Inestrosa loves to read, write, meet people, learn new languages, cook, and play soccer. He is married and has two children.
Sergio Inestrosa's area of expertise includes: US/Mexico relations. His recent collection of poetry is Los Bordes del Placer
Posted by Doug Holder at 9:57 AM
Labels: March 29th 5PM Poet Sergio Inestrosa Doug Holder
Newer Posts Older Posts Home