My Guest on Poet to Poet Nov 8, 2011 5PM is poet, performer James Caroline 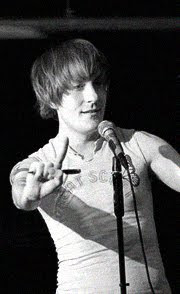 Over the past 4 years, the award winning poet and performer Jme, also known as James Caroline, has made a name for himself nationally through slams and features. In February of 2006 he toured the West Coast with Def Poetry's Caroline Harvey on the highly successful I See Red tour. James is currently the front man for the band Miette with Matt Vears. His work is a rare mix of literary craft and vulnerability, and the intensity of his performances has garnered comparisons to Patti Smith.

James was voted Best Local Author in the 2006 Boston Phoenix poll. He is a multiple winner of Cambridge Poetry Awards for Best Erotic Male Performance Poet and Best Slam Poet Male. He has guest-lectured and performed at Mount Ida College, Hampshire College, Emerson College and Bilkent University in Ankara, Turkey. In May of 2007 he taught and performed at The Saints and Sinners Literary Festival in New Orleans. He has studied with Anya Achtenberg, Patricia Smith, Regie Gibson, Sascha Feinstein, and Toni Amato. During the spring of 2004 he directed and performed in Musician and the Muse, a performance of poetry and music at The Cambridge Multicultural Arts Center featuring Nicole Terez, Tom Daley, Regie Gibson, and Iyeoka Okoawo.

He has competed with two National Slam teams, and represented the Cantab Lounge in the first Individual World Poetry Slam. In 1997 he was commissioned to write the vocal text and act as artistic sound director for Naked Truths: Voices of Shame, Sexuality, and Eating Disorders in Women, which was performed at HERE multimedia center in Manhattan. He's been published in Quarry, Subliminal, Pinned Down by Pronouns (a Lambda Literary Award Finalist for 2004), The Shadow Sacrament, the Cascadia Review, and Painted Bride Quarterly.
Posted by Doug Holder at 11:24 AM
Labels: 2011 5PM is poet, Nov 8, performer James Caroline Doug Holder Poet to Poet
Newer Posts Older Posts Home