June 26, 2012 Becca Chambers author of Beyond the Great Abyss 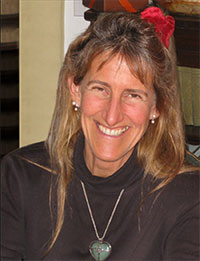 Beyond the Great Abyss by Becca Chambers

“Love and truth are the most powerful forces in the universe, and they reside in all of us as the embodiment of our eternal spirits, ready always to lead us to joy, true love and happiness.” In “Beyond the Great Abyss,” Becca Chambers takes us on a journey of her own personal transformation that includes three years of lessons in love and truth.

The cover to “Beyond the Great Abyss” may appear to be a woman shape shifting and, perhaps that is, after all, the correct way to look at the transformations. Half human and half owl, the woman on the front cover depicts the symbolism of the totem animal within. Owl medicine brings healing, clarity and wisdom. A feminine energy, the owl represents freedom, the moon and true seeking. Chambers recognizes that the journey she shares, condensed into a three year period of awakening, is a lifetime experience. In conjunction with an intuitive, an energy healer and other individuals placed in Chamber’s life for specific purpose, she was able to transform her physical dis-ease from the inside out. For many years, Chambers suffered from depression but through a commitment to her own psychospiritual health that led to her becoming a natural health healer, Chambers was able to alleviate her painful symptoms. Chambers holds a B.S. in Biology and a graduate degree in Naturopathy.

Through journal entries, Chambers shares her woes, her joys, her setbacks and her growth. Her ailing father is an ever-present intuitive support system for her while she struggles to understand the chaos of the other male relationships in her life and what they are mirroring back to her. There is no narrative in between journal entries. Therefore the book reads like a diary, allowing the reader to feel as if they have become a voyeur in Chambers life, but also with a feeling of wanting more cohesiveness at times, something to cushion the entries, like discs between the vertebrae that act as a shock absorber and help keep spinal movement supple.

What rings clear is Chamber’s love for her father despite her struggles with male figures in her life:

“Last Monday Dad hemorrhaged in his colon and nearly bled to death. Lots of transfusions and eventually he stopped bleeding. He had been on Coumadin, a blood thinner, because of a small stroke a year ago. Now the Coumadin nearly killed him – typical Western medicine. . .Now much of the time he doesn’t make sense. I’m the only one who understands him at all. I get right up close with my ear next to his mouth, and my mouth to his ear, and I can hear him and communicate. The others? They are so sure he isn’t there that they don’t try.”

Clearly Chambers is agitated throughout the book by her father’s downward spiraling, but also honored to be there for him and to listen to his intuitive guidance.

Chambers comments further on the owl from her cover toward the end of the book. After her long journey, she says that she recognized that the swiveling head of the owl is a metaphor for being able to see all sides of a person and also to view situations from all angles.

“The Great White Snowy Owl of the North has flown over my house and landed in the tall pine at the corner, where my yard meets the wood. . .I am the great White Snowy Owl now, with all the power and wisdom of its ancient and legendary symbolism. How I got there from the broken child I once was, and that grim and desolate place where I dwelled for so many years is the subject of this book.” Becca Chambers
Posted by Doug Holder at 1:54 AM
Newer Posts Older Posts Home