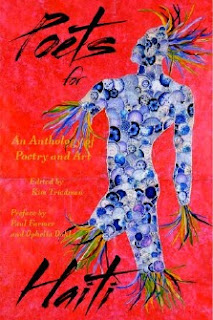 On February 23, 2010 — six weeks after the city of Port-au-Prince was brought to its knees by one of the most destructive earthquakes on record — 18 remarkable writers joined together on the Harvard University campus and demonstrated just what poetry could achieve. (…)

The poets assembled for the reading represented a remarkable and diverse group. Given the time imperative it became a very democratic and almost incidental kind of assemblage, which was one of the things I most appreciated about the experience. Everyone owned the evening : the poet laureate shared the stage with the high school senior ; the university professors introduced the workaday poets ; the Haitian-born writers were there to speak for themselves. There was no grandstanding. Poets were introduced by name only. People were there to do something as sometimes only a group can — to make themselves heard.

As we were organizing this event, I keep thinking back to a children's book I used to read to my daughters called Miss Rumphius about a little girl named Alice. Alice's grandfather was a retired sea captain living out his old age on the coast of Maine. He tells her about all the wonderful places he has seen on his journeys. When Alice announces that she, too, will travel the world and then find a place by the sea, he replies : « That is all very well, little Alice, but you must also find a way to make the world more beautiful ».

I often think of that line, even after so many years. It's something I take very personally — the imperative, and the privilege. On February 23rd, poets of the greater Boston community came together to read some breathtaking poetry, to a huge audience that had assembled to support a stunning and critically important cause. Like little Alice, who grew old scattering lupine seeds over the hillside of Maine, we had all found a small way, that night, to make the world more beautiful.
Posted by Doug Holder at 6:03 AM
Labels: 2011: Kim Triedman/Patrick Sylvain /, May 24

Steven Luria Ablon, MD, is an adult and child training and supervising analyst and associate clinical professor of psychiatry at Massachusetts General Hospital and Harvard University Medical School. He is a recipient of an Academy of American Poets Award. Dr. Ablon just published his fourth collection of poetry Night Call, in which he explores the experience of doctors from schooling through training to practice. He has three previous collections of poetry: Tornado Weather, Flying Over Tasmania, and Blue Damsels. His poetry has been included in many literary magazines.
Posted by Doug Holder at 12:27 PM
Labels: Steven Luria Ablon Poet--- May 10 2011
Newer Posts Older Posts Home