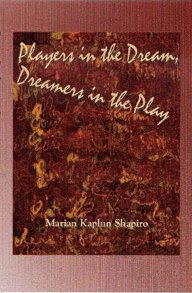 Born in 1939 in The Bronx (New York City), Marian Kaplun Shapiro received her B.A. in English (writing) from Queens College, and her Masters and Doctorate from Harvard. She lives in Lexington, Massachusetts, where she practices as a psychologist, specializing in post-traumatic stress disorder. In addition she has a specialty in working with hypnosis to enhance creativity for writers, artists, and musicians. She is a wife, mother, grandmother, and a Jewish Quaker.

In addition to her poetry, which has appeared in various literary magazines, she is the author of a full-length book of poetry, Players In The Dream, Dreamers In The Play (Plain View Press, 2007); two chapbooks, Your Third Wish (Finishing Line Press, 2007) and The End Of The World, Announced On Wednesday (Pudding House Press, 2007); a professional book, Second Childhood (Norton, 1989), a chapter in What Is Psychotherapy? (Jossey-Bass, 1990), and in Play (Wiley, 2002) and many journal articles.

As a young person, Marian was encouraged by her poetry studies with Stephen Stepanchev, Stanley Kunitz, Alan Tate, Kenneth Koch, and Archibald MacLeish. However, it is only since 2002 that she began to submit her work, and achieve publication in over 108 journals and anthologies, winning many (non-lucrative) prizes en route. She is constantly amazed at her good fortune, which includes her husband, two children, and four grandchildren. Her poetry often reflects the splitscreen truths of violence and peace, doubt and belief, despair and abiding hope.

READINGS: Around here, at the Friends Meeting in Cambridge; at the Lexington Public Library; at the Fireside Poetry series; at the Depot Square Gallery in Lexington. In NYC, at the Bowery Poets’ Club. In NC, at Guilford College. In Maine, at the Rangeley Public Library; in NH at the Peterboro Theatre and at the Peterboro Museum; in Chicago (in July) at the Women Made Gallery.

CHILDHOOD: Grew up as an ‘only child’ in a low-cost housing project in The Bronx. Graduated from the (free) Queens College just before turning 20. Married at 20 ½, after meeting husband and getting engaged in 10 days – must have worked, since am still happily married after 48 years. Went for a masters at Harvard, and then taught English in N.Quincy HS, where I ran a creative writing class and magazine. Then had two children, and when the second was one year old, taught English for 6 years part-time to returning adults at the Carnegie Institute of Medical Technology, where I got interested in adult learning. I went back to Harvard for the doctorate, starting out in Adult Education, and switching to psychology, becoming a psychologist and therapist in private practice in 1980.

’
Posted by Doug Holder at 6:21 PM
Labels: Holder on Shapiro 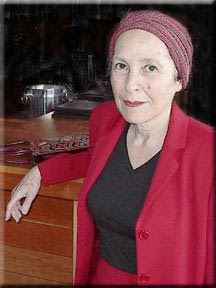 My guest will be poet Miriam Levine April 15 5PM

"I'm interested in people and their stories,"
says Miriam Levine. Her most recent book is The Dark Opens, winner of the 2007 Autumn House Poetry Prize. She is the author of In Paterson, a novel, Devotion: A Memoir, three poetry collections, and A Guide to Writers' Homes in New England. Her work has appeared in Harvard Review, The Kenyon Review, The Paris Review, and Ploughshares, among many other places.

A recipient of a National Endowment for the Arts writing fellowship and grants from the Massachusetts Artists Foundation, she was a fellow at Yaddo, Hawthornden Castle, Le Château de Lavigny, Villa Montalvo, Fundación Valparaíso, and the Millay Colony for the Arts.

She is Professor Emerita at Framingham State College, where she chaired the English Department and was Coordinator of the Arts and Humanities Program.

Born in Paterson, New Jersey, Miriam Levine now divides her time between Florida and Massachusetts. Currently she is at work on a new novel and a poetry collection
Posted by Doug Holder at 12:25 PM
Labels: Miriam Levine
Newer Posts Older Posts Home