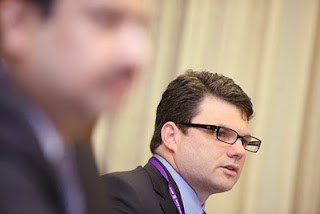 Kevin Gallagher is the author of three books of poetry, Gringo Guadalupe
(Ibbetson Street, 2009), Isolate Flecks (Cervena Barva, 2008), and
Looking for Lake Texcoco (Cy Gist, 2008). His poetry and reviews have
appeared in such publications as The Boston Review, Emergency Almanac,
Green Mountains Review, Harvard Review, Jacket, Peacework, the Partisan
Review and elsewhere. He is a frequent guest editor for Jacket, in 2004
editing a feature on Kenneth Rexroth, in 2008 on Denise Levertov, and in
2010 on Massachusetts poets that changed the world (of poetry). In 2004
he edited a chapbook titled Nevertheless: Some Gloucester Writers and
Artists. From 1992 to 2002 he was a publisher and editor of compost
magazine. A retrospective anthology of compost, co-edited with Margaret
Bezucha, is titled There’s No Place on Earth Like the World (Zephyr,
2006). He lives with his wife Kelly, and son Theo, in Newton, Massachusetts
Posted by Doug Holder at 3:28 AM
Labels: Kevin Gallagher Doug Holder
Newer Posts Older Posts Home