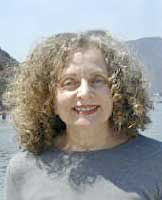 
Poet, professor and public lecturer, Barbara Helfgott-Hyett has published four collections of poetry: In Evidence: Poems of the Liberation of Nazi Concentration Camps (University of Pittsburgh Press: 1986), based on her interviews with U.S. GI's, was selected Booklist's "Editor's Choice." Her second collection, Natural Law (Northland Press, 1989) includes poems about the history of Atlantic City, and was the first in the Salt River poetry series. The Double Reckoning of Christopher Columbus (University of Illinois Press: 1992), an epic poem on the 1492 voyage of the Columbian expedition, was nominated for the Pulitzer Prize. The Tracks We Leave: Poems on Endangered Wildlife of North America, (University of Illinois Press:1996). Her new collection, Rift, is just out from University of Arkansas Press. Her poems and essays have appeared in dozens of magazines including The New Republic, The Nation, Hudson Review, Massachusetts Review, Agni, Ploughshares, The Women's Review of Books, and in twenty-five anthologies. Recipient of two Massachusetts Artists Fellowships in Poetry, the New England Poetry Club's Gertrude Warren Prize, the Herman Melville Commemorative Poetry Prize, Fellowships at Yaddo, the Wurlitzer Foundation, and Virginia Center for Creative Arts, and other grants and awards, she has taught English at Harvard, MIT, and Boston University where she won the Sproat Award For Excellence in Teaching. She is a co-founder of The Writer's Room of Boston, Inc, and Directs POEMWORKS: The Workshop for Publishing Poets, in Brookline, MA.
Posted by Doug Holder at 3:23 PM
Labels: Barbara Helfgott Hyett, Doug Holder
Newer Posts Older Posts Home