A multidisciplinary artist and educator, Susan Eisenberg re-imagines the everyday, playing with scale and juxtaposition to investigate issues of power and social policy. She is a Resident Artist/Scholar at the Women’s Studies Research Center at Brandeis University, where she focuses on projects that address patient-centered medical care and employment equity. She has developed two touring exhibits: the photographs and poems of Perpetual Care, and the mixed media installation, On Equal Terms. 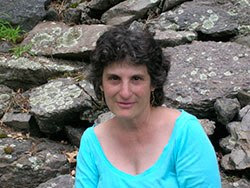 First introduced to the craft of poetry by Denise Levertov, Eisenberg holds a BA in Women’s Studies from the University of Michigan and an MFA in Creative Writing from the Program for Writers at Warren Wilson College. The author of the poetry collections Blind Spot (2006), Pioneering (1998), and It’s a Good Thing I’m Not Macho (1984), her poetry appears in numerous anthologies, including American Working-Class Literature (Oxford). She taught for more than a decade at the University of Massachusetts Boston, and has worked with students of all ages to develop tools for self-expression..

Eisenberg entered the construction industry in 1978, graduating four years later, as one of the first women in the country to achieve journey-level status in the International Brotherhood of Electrical Workers (IBEW). She earned her master electrician’s license in 1983, and worked on Boston-area construction sites for fifteen years, including during pregnancies with her daughter and son. In 1991, she began to interview other tradeswomen pioneers from across the United States. These oral histories became the basis for her nonfiction book, We’ll Call You If We Need You: Experiences of Women Working Construction (1998), selected as a New York Times Notable Book and developed into a not-yet-produced feature film screenplay by MGM.

As a poet, artist, activist, author and lecturer, Eisenberg helped shape the cultural expression and analytical thinking of the tradeswomen’s movement nationally and internationally, speaking at the U.S. Department of Labor in Washington D.C. and the International Labour Organization in Geneva, Switzerland. A recipient of the Samuel Gompers Union Leadership Award, she served on the Planning Committee of the First National IBEW Women’s Conference, and consulted with the AFL-CIO’s Center to Protect Workers’ Rights on equity policies.

In the 1970s and ‘80s, Eisenberg was Artistic Director of Word of Mouth Productions, a touring women’s theater company, and then, for ten years, directed Women in History, a performance workshop combining theater and oral history at the Boston Public Library. Her recent work has been awarded grants from Mass Humanities, Berger-Marks, Tavris, Tyre and Puffin Foundations, as well as writing residencies at Hedgebrook and Martha's Vineyard.
Posted by Doug Holder at 3:44 AM
Labels: 2019, Doug Holder, Poet Susan Eisenberg--July 26
Newer Posts Older Posts Home