SINGER/SONGWRITER JENNIFER MATTHEWS: An artist of the road, heart and life.

Poet/Vocalist/Musician   Jennifer Matthews is releasing a 7th CD  "Tales of a Salty Sweetheart."  She has engineered this album herself and it was mixed by Phil Greene ( 25- time Grammy Award-winning engineer) who according to Matthews told her, “Tales of a Salty Sweetheart is one of my favorite records I have mixed in the last 10 years.” Matthews had a number of musician preform on this album including Russell Chudnofsky who played the Dobro slide guitar. The CD will be released by the label Thundamoon Records founded by her manager Rose Gardina, who also founded the Boston Girl Guide website and magazine.

Matthews, who is studying  at Salem State University for her degree in English, said when she writes lyrics she literally locks herself in a room. She smiled "I can’t be disturbed.” And like the poem finding the poet ,the song finds Matthews. Matthews says she is in touch with her “inner voice.” Her lyrics can be ethereal and transcendent and she counts Leonard Cohen and Bob Dylan as spiritual masters who have influenced both her lyrics and music.
Matthews has been collaborating on poem song projects with poets Doug Holder and Dennis Daly, and will be taking on new projects as time allows.


For more information about upcoming events go to:Jennifer Matthews
Posted by Doug Holder at 8:05 AM 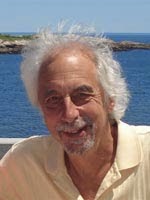 Krikor Der Hohannesian lives in Medford, MA. His poems have appeared in many literary journals including The South Carolina Review, Atlanta Review, Comstock Review, Peregrine and Connecticut Review. His first chapbook, “Ghosts and Whispers”, was published by Finishing Line Press (2010) and was nominated for the Pen New England and Mass Book Awards. A second chapbook, “Refuge in the Shadows”, has just been released (Cervena Barva Press). He can be contacted at krikorndh@verizon.net for anyone wishing to order copies ($10 including shipping and postage).
"In Krikor Der Hohannesian's poetry, we hear things we might not be able to hear otherwise. "A man is down" signals the wind and rain coming in from the east, and the poet listens. In another poem a wife is keening, a child is crying, and the poet listens, listens with all his imagination and his heart. We hear colonial whispers emanating from the Granary Burial Ground. We hear the particular beauty of the names of the winds in many languages, and in another poem we hear the equally specific sadness of parents grieving a lost child. We hear final words, and words that should have been said, and we hear in several of these poems the long, agonized memory traces of the Armenian genocide. In all there is a deeply empathic imagination at work, and these poems give the poet and the reader alike a place of refuge, a place in the shadows in which to hold onto what is so profoundly dear and filled with meaning." -Fred Marchant, Author of The Looking House
Posted by Doug Holder at 2:42 PM
Newer Posts Older Posts Home