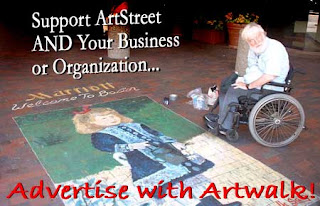 My guest will be noted street artist and arts activist Side Walk Sam. Sam will be talking about the Sept 15th celebration of Stone Soup Poets founder Jack Powers 70th birthday that he is helping to organize.


Robert Guillemin is "Sidewalk Sam," the popular artist dedicated to creating art at the feet of pedestrians to inspire, promote spirit, enrich daily life, and address social issues. Sidewalk Sam has been called the "Johnny Appleseed of Art" and a "Pavement Picasso". He has been featured on the "Today Show", "Good Morning America", "Evening Magazine" and "Real People" and in hundreds of newspaper articles from coast to coast. He takes arts to the streets with charm and expertise that has thrilled millions of people for nearly forty years.

Through a magical blend of community art initiatives, broad-based participatory events and an unfailing joyful spirit, he organizes citizens, government agencies, cultural organizations, schools and corporations to work together for a common cause.

After studying at Boston College and receiving a bachelor’s and master’s degree in painting from Boston University, Robert followed a traditional path to becoming a successful artist. He had many commissions and exhibits, including one-man shows at Boston’s Institute of Contemporary Art and the Rose Art Museum of Brandeis University, but the structure of the art scene was not a good fit for the artist he was becoming. He believed that art’s focus on a small, elite audience caused it to turn its back on society at large. He realized that "art for art’s sake" was not the same as "art for people’s sake."

Sidewalk Sam was born when Robert stepped outside of traditional art venues and took his talents and enthusiasm to the streets. Choosing "Sidewalk Sam" as a nickname and using skills he had sharpened while a copyist at the Louvre Museum in Paris, he began to reproduce beloved masterpiece paintings on the sidewalks of Boston. "By staying in museums, galleries and the halls of academe, I felt I was missing the human experience. So I chose to bring art to the street and into daily life. I love crouching on the sidewalk, kneeling at the feet of people and having art look up to us for a change. I want art to serve people as a natural part of everyday life. I think art should bring people closer to each other and inspire people to a better vision of society."

Sidewalk Sam makes a connection with the public. They gather on street corners to watch him chalk on the ground. His art is in perfect harmony with the pedestrian experience - a polite, social event in the streets of our cities where there is often a need for civility. Using the streets as a canvas, Sidewalk Sam has rallied people around solutions to social problems, addressing issues like poverty, diversity, children and family and the environment. Now in a wheelchair, Sidewalk Sam still thinks big. He organizes large events where lots of people come together and create big artworks to show their common spirit. “I love to get people involved with each other", he says. "Art can bring society together.” He adds, “Everything in modern life is so depersonalized - I’m just trying to personalize it a little.”