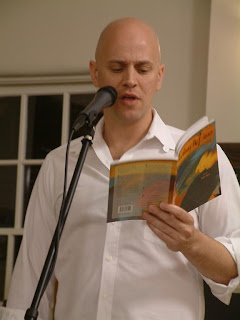 John Amen is the author of two collections of poetry: Christening the Dancer (Uccelli Press 2003) and More of Me Disappears (Cross-Cultural Communications 2005), and has released two folk/folk rock CDs, All I’ll Never Need and Ridiculous Empire (Cool Midget 2004, 2008). His poetry has appeared in various journals and anthologies, including, most recently, Rattle, The New York Quarterly, The International Poetry Review, Gargoyle, and Blood to Remember. He is also an artist, working primarily with acrylics on canvas. Amen travels widely giving readings, doing musical performances, and conducting workshops. He founded and continues to edit the award-winning literary bimonthly, The Pedestal Magazine (www.thepedestalmagazine.com).
Posted by Doug Holder at 3:12 PM
Labels: Holder on Amen
Newer Posts Older Posts Home