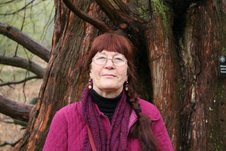 My guest will be poet Elizabeth Quinlan whose new collection is titled: "Promise Supermarket" ( Ibbetson Street 2008) with an introduction by Martha Collins.

"As consciously and effectively as a short novel, Promise Supermarket depicts the life of a family moving ever downward, from a house on a hill to a one-room cellar apartment. . . . One of the marvels of this book is that Elizabeth Quinlan is able to depict the immense difficulties of her childhood with both quiet understatement and clear detail, allowing us to share her experience with the deep involvement that fully inhabiting a new literary space, however bleak, may give. . . . The magic of Promise Supermarket is to turn the power of visual imagination and memory into unforgettable stories—to “grow treasures” out of what was planted in the treeless ground of a difficult but tenderly remembered childhood. —Martha Collins, from the foreword
Posted by Doug Holder at 5:58 PM
Labels: Holder on Quinlan

Poet to Poet/Writer to Writer With Doug Holder : The Interview


Ibbetson Street Press, which was originally started by Doug Holder and his wife Dianne out of their house on Ibbetson Street in Somerville in 1998, now resides at 25 School Street and has just published their 16th Issue of “Ibbetson Street”, a collection of poetry, with their 17th to be released soon. The publication started as a copied and stapled booklet of participating poets, and is now a properly bound publication that is discussed in college classrooms and collected in university libraries across the country. Ibbetson Street Press has also published many books and other collections of poetry along the way. I Refused to Die by Susie Davidson is their most recently acclaimed release, which centers around the testimonies of Boston-area Holocaust survivors.

A poet by desire and passion, Doug goes against the grain of the self-involved artist’s life by his continuous effort support and create opportunity for writers and poets to become published, and by creating a sense of community among his peers. He writes a column called “Lyrical Somerville” which appears in the back of The Somerville News and features different local poets, and is also on the Board of the Wilderness House Literary Retreat which is a new retreat for writers in Littleton, MA. Another way Doug reaches out to help poets and writers express their voice is with his cable access show, “Poet to Poet/Writer to Writer” produced here at SCAT. Doug says that the show gives him the opportunity to “sit down and talk with strangers” which he said he otherwise finds very nerve-wracking. It also allows him license to inquire about their work and personal lives, and record it onto video. In this way, he creates a rich living history. The tapes are archived at Harvard and other libraries as a permanent record. His interviewees have included local and national legends in the poetry world including Diana Der-Hovanessian, who heads the New England Poetry Club, the recently deceased Robert Creeley, and Louisa Solano of the Grolier Poetry Bookshop (who had plenty of stories to share with Doug about her regular run-ins with Jack Kerouac and Robert Lowell during their days at Harvard).

Doug has had his own poetry collections published by different presses and poetry magazines. In the fall his collection called Wrestling With My Father, about his relationship with his recently deceased father, will be released by a publisher in Pittsburgh.

For more information about Doug Holder and Ibbetson Street Press, you can visit his website at http://yahoogroups.com/group/ibbetsonstreetpressupdate. For a schedule of “Poet to Poet/Writer to Writer”, visit our Programming page.