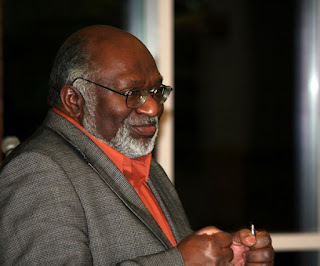 Charles Coe is the author of two collections of poems published by Leapfrog Press: “Picnic on the Moon” (1999) and “All Sins Forgiven: Poems for my Parents” (2013). An accomplished jazz vocalist, Coe is known for his powerful readings and warm and compassionate voice. He is featured on numerous spoken word CDs, including “Get Ready for Boston,” a collection of stories and songs about Boston neighborhoods, and “One Side of the River,” an anthology of Cambridge and Somerville poets.


In “All Sins Forgiven,” Coe writes as a way to understand his own mother and father, and to connect readers with their own parents

.
Marge Piercy describes the collection as “at once an extremely clear-sighted and unsentimental portrait of Coe’s mother and father, and a book written with great tenderness. It’s rare we can come to see our parents in themselves, and even rarer to see all their faults and yet express love and understanding, as these poems do.”
“My Mother Cut My Hair” begins: “As she stood behind me / dressed in motherhood’s ill-fitting robe / I wonder what messages she read / in the hair that settled around her feet / like snow from some private winter.”
Coe is a program officer for the Massachusetts Cultural Council and a long-time activist with the National Writers Union, a labor union of freelance writers. He lives in Boston.
Posted by Doug Holder at 1:06 PM
Newer Posts Older Posts Home