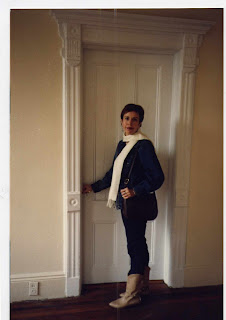 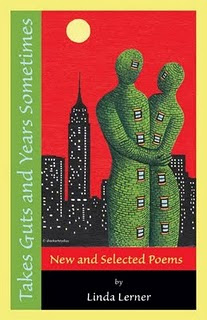 Takes Guts and Years some time, (NYQ) a poetry book by Linda Lerner has been released. Linda has been previously published by Ibbetson Street "Koan from Samsara." She will be having a book signing at the Grolier Poetry Book Shop in Harvard Square from 2 to 3PM ( June 14)--hope you can attend!

May 1, 2011 - New York, NY - NYQ Books™ is proud to announce the release of Takes Guts and Years Sometimes: New and Selected Poems by Linda Lerner. Linda Lerner’s latest book is a collection ofpoems dating from the early 80’s to the present. An immigrant daughter’s courageous search forher identity, her refusal to compromise who she is for a paycheck or for love is viewed in the backdrop of major public events. Upheavals in her personal life are paralleled by those in the larger world. There’s the bombing of the World Trade Center in 1993 and the subsequent attack in 2001 six blocks from her home. This latter event triggers memories of stories her estranged father told about his escape from Russia. There are the hardships caused by gentrification. The locale is primarily New York City, but it could be any place, where the fault lines of vulnerability in individual lives suddenly give way to tremors outside, and the earth shifts beneath them.

“As one of Whitman’s children, Linda Lerner’s poems are breathless and pulsing, alive with a hunger to taste, devour, smell, witness and embrace. She is insatiable, open, doesn’t want to miss anything.


The poems have an urgency. She is famished for life, is starved for what is hot and spicy, real and she takes risks, refusing to settle. Fascinated by people, she writes movingly not just about her self and her lovers but about her family with its Russian immigrant roots and background and conflict and pain but also about ordinary people in the Bowery, old men and ruined women, the woman in a box, the young with their hormones bursting. She makes the city shimmer with its smells—pastrami and rye and cream soda, smoke, tar, sewer smells, garbage—the beauties and terrors—the World Trade Center attacks, the dangerous streets she refuses to let scare her away. Even the poems of the blues and rawness of life celebrate in
the way the blues celebrate.” —Lyn Lifshin


Linda Lerner is a New York City Poet, born and raised in Brooklyn where she now lives. She is the author of thirteen poetry collections and has been twice nominated for a Pushcart Prize. Her most recent collections are: Something Is Burning In Brooklyn, (Iniquity Press / Vendetta books, 2009), Living In Dangerous Times (Presa Press, 2007) & City Woman, (March Street Press,2006 ; (The last two
were Small Press Reviews’ Pick of the Month) In 1995, she and Andrew Gettler founded POETS on the line (http://www.echonyc.com/~poets) the first poetry anthology available on the internet.
Posted by Doug Holder at 7:58 AM
Labels: June 14 5PM Poet Linda Lerner Doug Holder
Newer Posts Older Posts Home