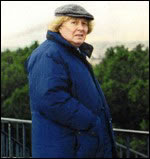 
Hugh Fox was born in Chicago in 1932. He spent his childhood studying violin, piano, composition and opera with his Viennese teacher Zerlina Muhlman Metzger. He received a M.A. degree in English from Loyola University in Chicago and his Ph.D. in American Literature from the University of Illinois (Urbana-Champaign). He met his first wife, a Peruvian woman named Lucia Ungaro de Zevallos, while at Urbana-Campaign and was a Professor of American Literature from 1958-1968 at Loyola University in Los Angeles. He became a Professor in the Department of American Thought and Language at Michigan State University in 1968 and remained there until he retired in 1999. It was at MSU that he met his second wife Nona Grimes. They were married in 1970. He received Fulbright Professsorships at the University of Hermosillo in Mexico in 1961, the Instituto Pedagogico and Universidad Católica in Caracas from 1964 to 1966, and at the University of Santa Catarina in Brazil from 1978-1980. He met his third wife Maria Bernadete Costa in Brazil in 1978. They've been married for 28 years. He studied Latin American literature at the University of Buenos Aires on and OAS grant and spent a year as an archaeologist in the Atacama Desert in Chile in 1986.
Posted by Doug Holder at 6:14 PM
Labels: Holder on Fox
Newer Posts Older Posts Home