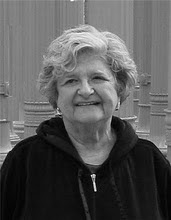 The poetry collection, East of the Moon, is at once mythic, narrative, story telling and bursting with flavor beads of some great stand-alone poems. As she takes the reader through the lifecycles of a mature woman, age 70, we see the span of a full first collection, which has obviously been writing itself in the back of her mind for a long time. It may be a first book, but not a first-time writer. The work echoes with the awful meanings behind fairy tales, the things that the original tellers didn’t dare to say but to imply. It also seems influenced by William Blake’s voices of innocence and experience.

The cover design and inside black and white ink drawings add a lot to the fairy tale theme. But the royal blue cover and its own painting quoting “Schoen ve de le vune”—you are lovely like the moon.—makes its own stamp on the collection as it literally feels like nubuck leather boots, which mimic the boots of the Cossacks and others roaring through history, using and abusing women and everyone else.

Some examples from the book:

“She was the clever one,/Hansel had always been slow./She knew they could not go back/their stepmother would break them/their father would betray them…”(“Gretel Ever After”).“She told the prince, If I married you/I would become a frostbitter woman/who could not hear my children/sing or cry/…Touch me and I will kill you…He ran… /She made her lonely way over roots and rocks…(to where) a rosewood piano stood/Her hands spanned octaves./She played a Bach prelude.” (“The Sleeping Princess”)Compare this narrative style to poetry later into the life cycle—a grandmother’s poetry:In “Consider the Trees,” she writes sheer lyric poetry: “how I have grown like the cypress/crouched on a cliff/sentinel searching/the inhospitable sea/…all that grows/…must find a way to live.” Or “Rachel’s Birthday Poem”: “You sail into your second year/wobbling and yawing in front/I in your wake/You are the music language makes,/you are the golden heart of the plum.”


Ruth Kramer Baden has been a 1950s married mother, a creator of a local chapter of the National Organization of Women, a journalist, a consultant on children for Wellesley College, and at age 50, she graduated law school! (She practiced elder law). She’s currently working on her retirement dream of becoming a poet. Give her book a try.
Posted by Doug Holder at 9:00 AM
Newer Posts Older Posts Home