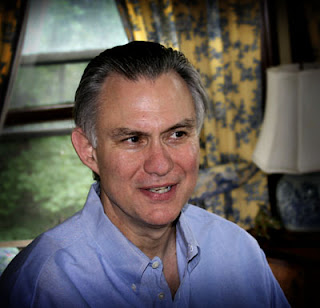 
Luke Salisbury is a Professor of English at Bunker Hill Community College in Boston and teaches English and Film. He is the author of The Answer Is Baseball (Times Books, 1989; Vintage, 1990) which The Chicago Tribune called the best baseball book of 1989, (A Common Reader said, “Salisbury reveals the heart of the sport better than writer I’ve read,” No. 47, April, 1991), and a novel, The Cleveland Indian (The Smith, 1992; paperback, 1996) which was nominated for the Casey Award in 1992 as best baseball book of the year, and was studied at Indiana State University in an American literature course. Blue Eden, a novel in three stories, (The Smith; hardback and paper, 1996). Ellery Queen Mystery Magazine said, “The middle tale, ‘The Number of the Beast,’ is a gem.” Hollywood and Sunset, a novel will be published by Shambling Gate Press, fall 2005. Mr. Salisbury contributed to Red Sox Century: One Hundred Years of Red Sox Baseball, Baseball & The Game of Life, Ted Williams: A Portrait in Words and Pictures, DiMaggio: An Illustrated Life, Jackie Robinson: Between the Baselines, Fall Classics: The Best Writing About The World Series’ First Hundred Years and wrote Chapter 9 of a Treasury of Baseball, published by Publications International Ltd. His work has appeared in the Boston Globe, Ploughshares, Stories Magazine, Pulpsmith, Fan, Elysian Fields, Spitball, Nine, SABR Review of Books, Cooperstown Review, and (in translation) AERA, the Japanese equivalent of Time. He is a past vice president and national secretary of the Society For American Baseball Research (SABR). Mr. Salisbury was the first keynote speaker at Nine Magazine’s Annual Spring Training Conference (1994), and was a frequent guest on Channel 2 Boston’s “Ten O’clock News,” “The Group,” and “Greater Boston,” New England Cable News Network, Comcast’s Sports Pulse, and WBUR’s “Connection.” He was featured in AMC’s “Diamonds On the Silver Screen,” HBO’s Curse of the Bambino and wrote the Krank column for Boston Baseball from 1996 to 1999. His latest book is "Hollywood and Sunset."

Mr. Salisbury attended The Hun School, New College, and received an MA in Creative Writing from Boston University. He once taught third grade in the Bronx, and now lives with his wife Barbara and son Ace in Chelsea, Massachusetts.
Posted by Doug Holder at 12:14 AM
Labels: Holder on Salisbury
Newer Posts Older Posts Home