May 1, 5PM Tim Devin Curator of the New Small Press Collection at the Somerville Public Library 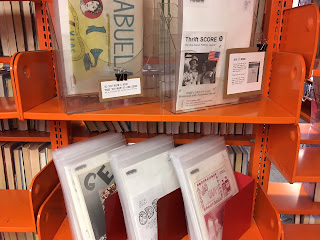 I met Tim Devin at my usual corner of the Bloc 11 Cafe in Union Square. We were there to talk about his new project, namely a small press collection at the main branch of the Somerville Library—where Devin also works. Since I have been involved in small press publishing for decades, and a proud member of this group of ink-stained wretches, Devin's project was of utmost interest.

Devin is a man somewhere in middle age, of average height and build, who speaks in a calm and collected professional manner, but occasionally this composure cracks with a small press geek's enthusiasm—especially when he talks about a new find for the collection.

Devin has lived in Somerville since the 90s. He has been involved with a number of literary/art projects, and was on the board for the Somerville Arts Council. Devin told me, “ I love the sense of community in Somerville. It seems that people care about each other in this city.”

The definition of “small press" varies. Devin defines it as booklets, zines, magazines, that have a small press run, and are local in nature. The scope of the collection will include Somerville, Boston, Cambridge and other places in the immediate vicinity.

Devin told me that the small press collection idea was jump-started by New York Times columnist and noted writer Pagan Kennedy. Kennedy, a longtime Somerville resident, was a key figure in the zine scene in Allston and Somerville in the 80s and 90s. She has a collection of zines that has been collecting dust in her home, and she wanted to donate it to the Somerville Libray, rather than some academic library.

I asked Devin why the library would promote such an arcane collection of little magazines, etc... He reflected, “ I think the library's mission is to provide information. Here they provide an archive of local talent. They provide a sense of literary history in the city.”

Devin gingerly handled a bunch of his treasures in plastic sleeves. He talked enthusiastically about a zine named “Zunti”--a wildly colorful production that illustrates an author's florid dream. He showed me a comic book by the Somerville Media Center's Programming Director , Dave Ortega titled “Abuela.” This little book deals with Ortega's Mexican background, as well as Mexico's political and cultural landscape. There is also work by Somerville's Gilmore Tamny who has been producing artful poetry chapbooks for over twenty years.  The collection includes many other booklets, etc...that deal with pop culture, music, a plethora of genres.

The collection is just getting started, and for now it is not collecting standard perfect-bound books from the small press. Devin said he loves donations and now is a bit short on poetry. So if you have
a trove of small press publications, think about contacting Tim Devin at the library, and find a home for your favorite zines.

Statement from the Library:

Patrons are free to check out items out of the library (although the older items in the collection are reserved for in-library use only). This collection is located near the graphic novels on the second floor of the Main Library at 79 Highland Ave.

We’re also actively building this collection! Are you a zinemaker? Did you recently come out with a booklet or small magazine or small art book? If so, get in touch with Tim at tdevin@minlib.net or 617-623-5000 x2963.