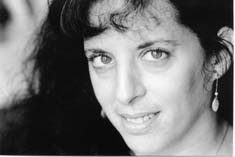 Eva Salzman grew up in Brooklyn and on Long Island where she was a dancer/choreographer. At Stuyvesant H.S., her teacher was Frank McCourt, and later, at Bennington College and Columbia University, where she received her MFA, she studied with Derek Walcott, Joseph Brodsky, C.K. Williams, Edmund White, Elizabeth Hardwick, Stanley Kunitz, Carolyn Kizer, Stephen Sandy and Jorie Graham. Her books include The English Earthquake (Bloodaxe) Bargain with the Watchman (Oxford) and, One Two II (Wrecking Ball Press), illus. Van Howell, all Poetry Book Society Recommendations/Special Commendations.

Her grandmother was a child vaudeville actress, and her mother is an environmentalist. This background, and a diverse range of jobs - as Exercise Director of a Brooklyn orthodox Jewish diet centre, out-of-print book searcher and cleaner of rich ladies' houses - all inform her writing, especially her cross-arts projects with performers and visual artists. She has collaborated with the director Rufus Norris and with composers Gary Carpenter, Rachel Leach, Philip Cashian and A.L. Nicolson. Shawna and Ron's Half Moon: An Americana Satire and One Two, commissioned by the English National Opera Studio, were performed there, at Hoxton Hall and at Greenwich Theatre. Cassandra, a mini-opera written with her composer father, Eric Salzman, has been performed in Dusseldorf, Vienna and Oslo. She won 2nd Prize in the National Poetry Competition and major prizes in the Arvon and Cardiff Poetry Competitions. Grants and awards include those from the Arts Council, Royal Literary Fund, London Arts Board and the Society of Authors

Her work has frequently been broadcast on BBC radio, and has read her work at the Royal Festival Hall, Barbican, Poetry Society, Troubadour and at festivals all over the UK, as well as in Ireland, Spain and France. In the US, she has read at the Nuyorican Café, the Walt Whitman Association and at Wesleyan Writers' Conference, where she also taught, as a Fellow two years running. Her varied teaching work has included Adjunct Professor at Friends World Programme (Long Island University, London, regular teaching for the Arvon courses, for community projects in London's East End and a residency at Springhill Prison, as well as continuing work for the Poetry Society's educational programmes, and co-devising the Open University's first Start Writing Poetry course.