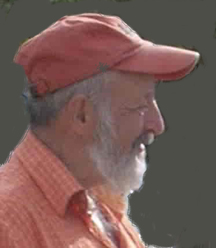 
Bert Stern was born in Buffalo, New York in 1930. He was educated at the University of Buffalo, Columbia,and at Indiana University, where he earned his Ph.D. in English.
Stern taught for forty years at Wabash College, where he is now Milligan Professor of English, Emeritus. He also taught from 1965-67 at the University of Thessaloniki and from 1984-85 at Peking University. He presently teaches in "Changing Life Through Literature," a program for men and women on probation.

His poems have been published in New Letters, The American Poetry Review, Indiana Review, Poetry, Spoon River Poetry Review, among others, and in a number of anthologies. His chapbook, Silk/The Ragpicker's Grandson, was published by Red Dust in 1998. His essays and reviews have appeared in Sewanee Review, Southern Review, Modern Language Review, The New Republic, Southern Review, Columbia Teachers’ College Record, Adirondack Life, and in a number of anthologies. His critical study, Wallace Stevens: Art of Uncertainty, was published by the University of Michigan Press in 1965
Posted by Doug Holder at 7:43 AM
Labels: Bert Stern
Newer Posts Older Posts Home